SPORTS: I got Bull's Eye

Darts, a traditional pub game, got its name from Dartford, United Kingdom, where the first recorded dart game was held. This is a game where darts (or pins as I call it) are being thrown at the dartboard.

And talking of dartboard, do you know that its old name is "butt?" Because it is believed that the bottoms of wine barrels were the original dartboards. Interesting, isn’t it?

Well, I first learned about darts when my uncle, one afternoon, brought home a dartboard. And every morning after that, I could hear a "thug…thug…thug" in our garage. It's fascinating to see him throwing pins at the dartboard, trying to hit the green, red, white and black colors, and scoring it.
I really thought that that game was an easy one: just throw the darts (or pins) and then "score" it. However, when I actually tried it, damn that was difficult!
My first throw did not even hit the board. It just flew inches or a foot away from me. Second pin: it hit the board, but milliseconds after, it dropped. Third pin: it hit the board, but it was on the No Score Area. 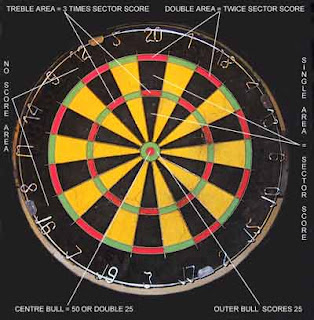 And because of that, I challenged myself to learn and master this game. So every morning, I tried to practice and practice: Focusing before throwing the darts and making a target. But mind you, it was NOT that easy! Even professional players slipped.

Killer(s) is my favorite game. It is being played by owning a number, building up lives, and killing or removing your opponent's lives he/she has built up.
To own as many numbers and to build as many lives as you can are the key points to win the game.
During our intramurals in high school, I played darts. I was so confident that I would be the champion of this game. When the game started, my opponent, I would say, had a lucky charm.
She wasn’t really hitting a target. She was just throwing the darts, WITHOUT a target, and oh my! It always hit, let's say, either on the treble area or on the double area, or sometimes both. Much to my chagrin, I lost. I only got the third place…among four players [sigh].
I wanted revenge. So when I got into college, I played darts, again, during intramurals. On my first year, I got the second place. And when I was on my second year and third year, I was the champion. FINALLY!
I wouldn’t say that I'm really good at this game but I can hit a cherry or a bull's eye, say like, 2 out of 3. So wanna bet?
personal