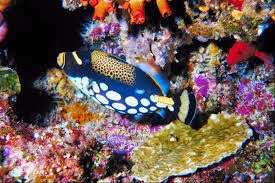 Swimming with sharks and watching different species of fish are just two of the things you can do when you’re diving in Tubbataha Reef National Park. Get to know the best, highly recommended diving sites in this place.

Are you into scuba diving like me? How about let’s take an adventure to Tubbataha Reefs National Park? The park is home to several diving sites. In 2008, it has been nominated as one of the world’s Wonders of Nature. And since 1993, it’s been a UNESCO World Heritage Site. Thus, you can just imagine how astonishing its beauty is. You might also be wondering about its diverse wildlife thriving there.

My friends who went there were in awe of it. They can’t describe its astonishing beauty in a few words. A sanctuary for marine biodiversity, Tubbataha Reef is home to more than 360 coral species, 13 whale species, 600 types of fish and 11 shark species.

It’s no wonder why wildlife enthusiasts from all around the world flock to this place just to experience its beauty and enjoy its awesome creatures. If you’re like me who want to scuba dive in this place, here are some suggested dive sites my friends have been to.

It’s found on the North Atoll that features awe-inspiring wall. The wall is covered with a wide array of corals. While you scuba dive, you’ll see groupers, mackerels and Napoleon wrasses drifting in this dive site.
How about sharks? Yes. It’s highly likely that you’ll encounter grey reef sharks and those beautiful white-tip reef sharks.

Lobsters and crabs can be easily seen while you enjoy night diving.

If you choose this dive site, then don’t expect to see lots of corals. Instead, you’ll enjoy watching and swimming with white-tip reef sharks and manta rays.

It’s another favorite diving site in Tubbataha Reef. But it’s not for a novice scuba diver as it’s known for its strong currents. You must only scuba dive along with a licensed open water diver.
Nonetheless, you’ll enjoy seeing different colorful corals, eels, rays and sharks. A giant ray may also come out, if you’re that lucky.

Catch hammerhead sharks while scuba diving in Malayan Wall within the Tubbataha Reef. But this site is intended only for advanced divers. This is because it needs you to drift into the deep blue sea to appreciate the water.

This is also ideal for open water diver as currents are strong. When you’re an advanced diver, you’ll enjoy swimming with seahorses, nudibrances and, yes, white tip reef shark.

Scuba Diving with an advanced diver

As previously mentioned, if you’re a beginner in diving, it’s best that you scuba dive with an advanced diver or get into a drift diver training. In this way, accidents can be avoided and you’ll enjoy the beauty of the place.

If you are into seeing and swimming with sharks and different species of fish, then you should visit Tubbataha Reefs Natural Park. Shark lovers must go and see Dalsan Wreck, which is also great for a full day diving. You’ll appreciate late afternoon dive in Staghorn Point.

Expect to spend more than PHP5,000 just diving into the Tubbataha Reefs.