SPORTS: One World One Dream


Do you know what I'm thrilled to see about the Olympic Games?
It's not the tennis games, the gymnastics, and archery, not even aquatics-swimming (Ian Thorpe has retired from competitive swimming).

But it's the spectacular opening ceremony and the dramatic ending ceremony of the Olympic Games.

First, the artistic display of dances and performances portraying the history or maybe the culture of the host country.

Then, the breathtaking pyrotechnics-- from Peony to Cake effects. 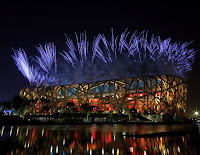 And while I'm watching them… I also imagine myself of being there…
…waving to the crowd (though they're not directly waving back at me)
But just the thought and the feeling of being part of the Summer Olympics that happens every four years and saying, under my breath,-- "I'll make history."