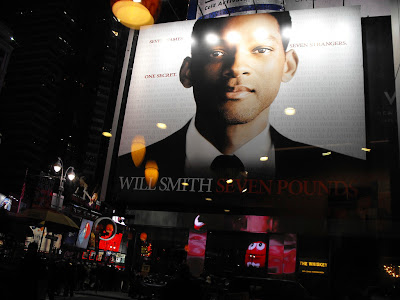 (Photo from rothj06) If you had the chance to make amends, would you do what Tim Thomas (Will Smith) did on Seven Pounds movie?
I never thought Seven Pounds would be that great but it touched the emotional part of me. Although the first hour of the movie was quite baffling but it in the end, I was completely enthused by the story.
Seven Pounds movie is directed by Gabriele Muccino and starred Will Smith. The first drama movie of Will Smith I've seen was Pursuit of Happyness. But Seven Pounds movie is a different one.
In the beginning of the movie, I wondered why he called up 911 and the reason for the call.
Bewildered more when he:
Enumerated these names: Ken Anderson, Nicole Anderson, Alli Anderson, Ed Rice, Steven Phillips, Monica Freeman, Sarah Jensen.

Visited Emily Posa, who had congenital heart failure and she believed she didn't deserve a heart because her life was unremarkable.

Annoyed and irritated with Steward Goodman.

Offered a helping hand to Connie Tepos, who was too proud to ask for help.

Spoke with George, the hockey coach, whom he considered a good man and was undergoing dialysis.

Constantly stared at Michael, the kid who was bald and had cancer.

Further, I really thought he was an IRS agent but as the story went deeper, I understood little by little the relevance of those people to Tim/Ben Thomas.
It will be more exciting when you don't know the synopsis of the film because you can really feel the thrill of the Seven Pounds movie. And so you will try to connect the dots.
Will Smith did a great job here. The soundtrack was appropriate especially at the end of the movie.
And the moral part of the film? Don't use your cell phone when you're driving. When you lost someone, you can never bring his/her life back, even if you try making something good.
Related Topics:
Changeling, Movie Review
Movie Review: The Accidental Husband
personal Reviews