Philippine Tarsier and The Earth Hour in Davao 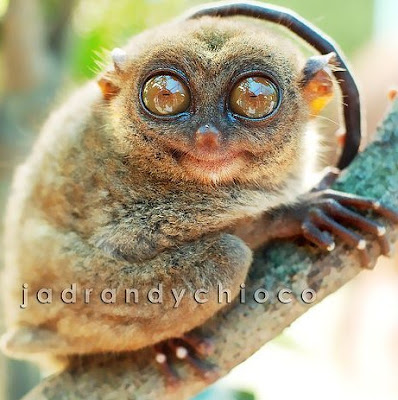 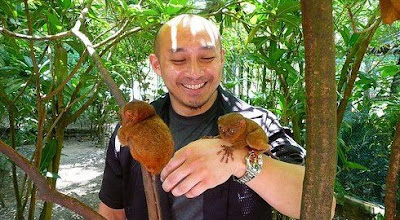 So small
The Philippine tarsier is a miniscule animal; so small that it will fit in the hand of a human.

Endangered Species
Its minuteness is the reason why they are barely seen in the jungle. They are the endangered species of tarsiers widely found in the Philippines, particularly in the Islands of Bohol, Samar, Leyte and Mindanao (but none found in Davao City). Philippine tarsiers can also be seen in the Maripipi Island, Siargao Island (surfing capital of the Philippines), Basilan Island and Dinagat Island. A different type of subspecies had reportedly spotted in Sarangani.

Large eyes
In addition to its size, the Philippine tarsier's big eyes are sui generis and because of that it was included in the Guinness Book of Records as having the largest eyes on any mammal. Their large-scale eyes gave them the superior ability to see at night.

Mating and newborn Philippine tarsiers
The mating season of Philippine tarsiers is in April until May and Tarsier's pregnancy lasts in 6 months. It is interesting to note that after copulation, the male tarsier closes the vagina of the female tarsier. The newborn tarsier is born with a lot of hair and with eyes open (unlike in human). Carrying their babies is through their mouth. Even though they're still babies, a month after they were born, they can already hop and jump.

And hopefully weeks from now, our Bohol escapade is going to happen.

Earth Hour in Davao
My family and I participated in the Earth Hour last Saturday. For 60 minutes, we unplugged every appliance we have and turned off the lights. We just stayed inside the dark room. However, some of my neighbors didn’t even bother to cooperate. I don’t know if they weren’t aware of it or they're just playing dumb.

At MTS (Matina Town Square), candles and lamps were lit to illuminate the area.