The Supermodel Without Belly Button 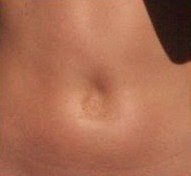 I've seen her pictures on glossy, fashion magazines and watched her on the runway shows, but I didn’t notice her NAVEL until E! emphasized her missing belly button.

Supermodel Karolina Kurkova is one of the Victoria's Secret Angels and was included on Forbes as one of the highest paying models, joining the likes of supermodels Gisele Bundchen and Heidi Klum.

This blonde, green-eyed, 5 '11" supermodel, who was born in Děčín, Czechoslovakia, started modeling at the age of 15 when her friend sent a photo of Karolina Kurkova to one of the agencies in Prague, and the rest, as they say, was history. 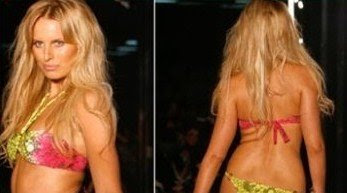 However last year, during a runway show (photo right: huffingtonpost.com), the press disapproved supermodel Karolina Kurkova's visible back fat and cellulite. Then it was later revealed that Karolina Kurkova is suffering from hyperthyroidism, which would explain her recent weight gain.
On the other hand, Karolina Kurkova's athletic and not-so-thin body is still considered sexy by some people unlike her co-angel, Miranda Kerr (Orlando Bloom's girlfriend) for example, whose body can easily be "blown away by air," figuratively (don't take it to heart MK).
Since, KK, it's your 25th birthday yesterday, February 28, let me greet you a happy birthday.
And I'm therefore wishing you'd read this and hoping (cross fingers) you'd reciprocate the gesture by giving me free air tickets to Prague, Czechoslovakia. c")
Related Topics:
Illac Diaz
Senator Pia Cayetano
Bridget Regan
Maksim Mrvica
Prince William
entertainment personal