Aaron Murray And His Torn ACL – Will Undergo Surgery 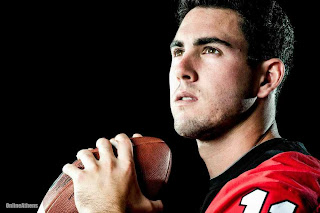 Uh oh, looks like Georgians won’t be able to see their senior quarterback in action this season. According to reports, Aaron Murray will be undergoing surgery this week. This is in connection with a torn ACL (anterior cruciate ligament). This type of surgery needs repairing and reconstructing of the ACL. The sad report has been provided by his school.

His mother, Lauran Murray, also took it to Facebook about her son’s injury and upcoming surgery on Tuesday.
WHEN IT HAPPENED
He injured his knee last Saturday after winning against Kentucky. According to the representative of his school, Aaron Murray has been evaluated by the school’s physicians on Sunday.

The surgery will be performed immediately because the swelling in his knee was just minimal. Most of the time, this type of surgery requires at least 10 days before the operation is conducted. But because his case was just minimal, his doctors want him to undergo such operation immediately.
SEASON END
Although his case isn’t that serious, his collegiate career will have to end. Despite that, he’s still considered as the leading passer having 121 touchdowns. He began by playing 52 consecutive games for Georgia. He nearly led his team to the SEC title. His team almost had the chance to obtain the national title last year but they fell 5 yards short during their game against Alabama.

When he returned, he almost had a shot at the NFL draft. However, it didn’t work out the way he planned to. Although Murray is a good player and he performs well all the time, his team has to suffer several injuries. As a result, they lost the SEC race because of their consecutive losses against Missouri and Vanderbilt in October.

CONFIRMATION OF HIS INJURY
His mother might have told Aaron Murray’s fans through Facebook about his condition. However, Aaron, himself, didn’t confirm the report. But he did say that his medical condition was mildly serious.

He thanked his fans through Twitter for their prayers.
entertainment