Jennifer Lawrence of Hunger Games: Catching Fire Has A New Haircut – Pixie Do 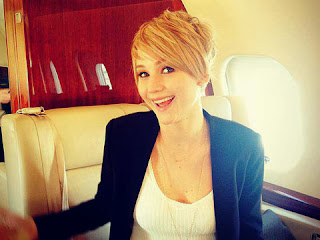 I thought Jennifer Lawrence was just wearing a wig when she showed up during the Google Plus Hangout a few hours ago. But based on various reports, it wasn’t a wig after all. She’s now sporting a new haircut, i.e. shorter do. And I love it.

Well, it’s a pixie do that accentuates her beautiful face. I’ve been reading a lot of this haircut lately, like Jennifer Hudson, Beyonce, and Pamela Anderson. These celebrities have been spotted sporting shorter hair over the last few months.

But what was her reason to cut her beautiful lock into a shorter do?

At first, she joked that she just wanted to make her director, Francis Lawrence, mad. But she later said that her hair was damaged because of too much dye. Yup. She dyed her hair during Hunger Games. Then, she went back to being blonde for another movie.

For me, no matter what the color of her hair is or how short it is, she still looks stunning. I’m very much excited to see her reprising the role of Katniss Everdeen on Hunger Games: Catching Fire. It’s a sequel to its 2012 film The Hunger Games. I’ve already read the three books. The first Hunger Games didn’t thoroughly reveal what had been written in the book. So, if you haven’t read the book, you might not understand as to why there’s Hunger Games.

A lot of people are saying that Jennifer Lawrence isn’t a good pick because she’s “fat.” But I think she’s the perfect actress to play the role of Katniss Everdeen. She’s proven her acting ability when she won Best Actress for her part on Silver Linings Playbook. I’d say she was great in that film.

I also managed to see her new haircut while she was trying out the Google Glass. Ugh! I’m so jealous of her. She’s just one of the few people who have tried it. I wish I could share the animated GIF of Jen with her new hair but I don’t think it’d work here on Blogger. But you can go to G+ and search for it.

So, what do I think of Jennifer Lawrence new hair? I’d say, she looks fabulous. She looks even prettier with it. And I can't wait for Catching Fire to come out.
entertainment