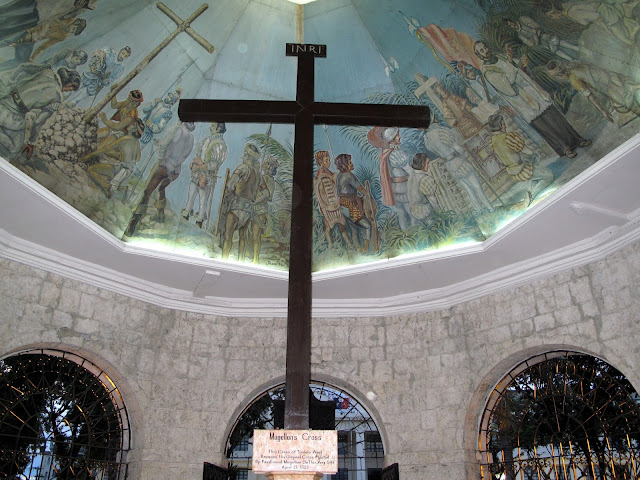 Cebu is one of the most livable cities in the Philippines. It’s not as crowded as Metro Manila. Cebu is also not as polluted as Manila and other cities in Luzon. Then, the cost of living is more affordable, just like in Davao City. And if you ride a taxi, Cebuano drivers are more trustworthy than drivers in Manila.

Most tourist spots in Cebu include beautiful islands, historical sites, and scuba diving sites. So, to make the most of your stay in Cebu, here are some of the tourist spots that you don’t want to miss when you’re in the Queen City of the South.

The Magellan’s Cross is a symbol of Roman Catholicism in the Philippines. It’s housed in a chapel and it’s been planted there to signify a major event, i.e. the propagation of Roman Catholic faith in the country.

It’s also a symbol of the colonization in the Philippines by King Philip II of Spain.

It’s the oldest street in the country and named after Christopher Columbus. This road was built during Spanish Colonization under the Spanish navigator Miguel Lopez de Legaspi.

Situated in the Beverly Hills Subdivision, the Taoist Temple is another popular tourist spot in the city. Built in 1972, it’s the center of worship for those who follow Taoism. To reach the temple, you need to take a lot of steps. So, it’s not ideal for tourists with weak knees and legs.

It’s not just an IT hub, but it’s also a lifestyle and recreation destination. Cebu IT Park offers a wide selection of cafes, wellness centers, restaurants, and retail stores, as well as bars. During the night, the place becomes livelier.

It’s in Lapu-Lapu City in Mactan Island. In here, you’ll find the 20-meter tall monument of Rajah Lapu-Lapu. He was the first Filipino hero who defeated the Spaniards and killed Ferdinand Magellan on April 27, 1521.

It’s a haven for those who are looking for dried squid, tuyo, dilis and several others. Dried mangos and otap are also found here.

Do you want an adrenaline rush type of experience? If you do, then you should go to Crown Regency Hotel and Towers. The place offers heart-pounding activities, such as Vertical Climb, Edge Coaster, Urban Zipline (this I like) and Tower Walk.

Besides the IT Park, Mango Square is also a perfect place to enjoy your night with your friends and family. In here, you’ll enjoy the fun and lively music and nightlife in the heart of the city.

Forget about your diet. Eat as much lechon as you want. Enjoy the street food paired with puso. It’s a cup of cooked rice wrapped in palm leaves.

Other tourist spots in Cebu that you can go to will include Fort San Pedro, Basilica del Santo Nino, Metropolitan Cathedral, and Provincial Capitol Building. Of course, there are other places that you can visit if you go to Cebu that aren’t listed here.

Did I miss anything? Please leave a comment.
Cebu Tourism Tourist Spots Cebu