It was weeks after Aaliyah died and days after our board exam. My overall system was filled with anxiety for the upcoming result…couldn't sleep.

I went out of my room.

My sister was watching something…a movie? I thought.

But on CNN? As I focused on, I saw the plane/s intentionally crashed into the Twin Towers.

Too tired to think about it, went back to bed without knowing what it was all about, until the morning came.

From the Internet to TV news to the newspapers... 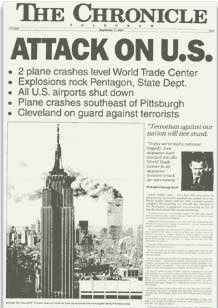 The U.S...one of the most powerful countries if not the most.

The U.S... that has the facilities...the machineries to prevent this but…

Then, the U.S. eventually declared a War on Terrorism and invaded Afghanistan.

Consequently, many nations tightened their security to fight against terrorism, though others failed.

Seven years later…I am still breathing and many of us are still haunted by the tragedy.

And we are still finding justice for the thousands of people who died.

Some of us, however, have short term memory and forgot all about what we’re fighting for.