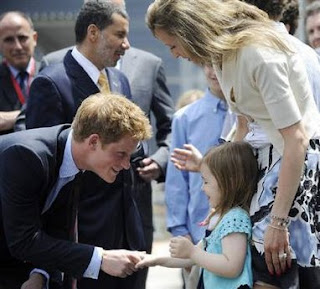 I grabbed this picture from news.yahoo.com. This is just one of the pictures taken during Prince Harry's official visit to the USA. Who would have thought Prince Harry would be this friendly to children? I'm not a big fan of this red-faced prince named Prince Harry, brother of Prince William. But after my discussion with a friend, I'm beginning to look at the other side of Prince Harry.

He's not as good looking as his brother William. There's no doubt about that. But he has different charisma that I cannot explain it through words. He may have tainted image before but now he's trying to change it by being more responsible (?). I wonder when he's going to visit the Philippines.
Related Posts:
Prince William
Karolina Kurkova
Illac Diaz
Senator Pia
Maksim Mrvica
Bridget Regan
entertainment personal