Because of a significant number of positive reviews about Fringe TV series, curiosity struck me so I downloaded the first episode of its first season. The first scene found me breathless. However, the excitement slowly dwindled when I saw Agent Scott (Mark Valley) and Agent Dunham (Anna Torv, the Cate Blanchett, Maria Sharapova, and Claire Danes wrapped into one) in the second scene. Mark Valley is just too old for my taste.

I almost stopped from watching the rest of the episode until I saw Peter Bishop played by Joshua Jackson. He is the same adorable guy in The Mighty Ducks and Dawson's Creek. 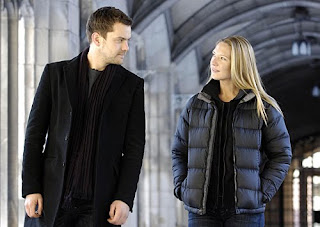 The excitement twisted back during the first meeting of Olivia and Peter. Their chemistry exuded instantly and was felt by me, especially when Joshua's penetrating blue eyes gazed at Anna's beautiful green eyes.

I am still on season 1. But based on Fringe's reviews I gathered, these two do not seem to have a real romantic scene, like those amorous episodes involving Scott and Dunham. But then again, I just hope the writers of Fringe would heed to the cravings of their fans for more exciting, not to mention passionate scenes between Olivia Dunham and Peter Bishop. That would really make my day.

Nicholas Sparks: Dear John You Are Missing
Heartbreak Quote 1001
Gibo For President: Why Not?
Marc Nelson: The Most Beautiful Man In The Philippines

Legend Of The Seeker: Who Would You Like To Date, A Mord-Sith Or A Mother Confessor?