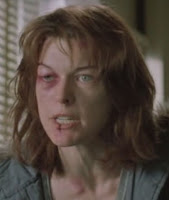 Face of the Week: Milla Jovovich
Born on December 17, 1975.
Milla Jovovich (Yo-vo-vitch) is a Serbian-Ukrainian model/actress/fashion designer/musician/etcetera.
Out of 20+ films she made, I've seen:
Return to the Blue Lagoon—derived from Brooke Shield's Blue Lagoon.
The Fifth Element—as Leeloo who was tasked to be the only one who can stop the Evil from extinguishing life.
The Messenger: The Story of Joan of Arc—as Joan of Arc.
.45-- as Kat who fell in love with Big Al. (Why he was named Big Al? Because he has this humongous…)
Resident Evil: Apocalypse, Extinction... – as Alice who had an amnesia that resulted from the inhalation of the nerve gas released into her bathroom and "metamorphosed into the Resident Evil." 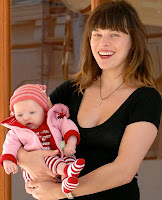 While waiting for the Resident Evil's sequel, let me step onto the podium to greet my Tita Milla a happy birthday.
Also, happy birthday to Angie and Marivic.