Interesting Facts A Person Must Know About Hotel Del Coronado 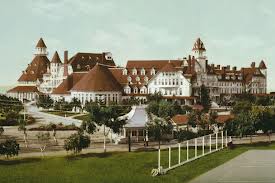 To the locals, they call Hotel del Coronado as, simply, The Del. It’s been sitting on the Southern California coast since 1800s. Its overall theme is Victorian. But these days, you’ll find a touch of modern high-end décor.
As a guest of this hotel, you’re free to roam around and walk through its beautiful areas and study its history.
Its Location
It’s in the south of San Diego. You can reach it by land or access it via the Coronado Bay Bridge which is situated in the downtown area.
What’s interesting about this hotel is that it’s located on the beach. Its area is as wide as 28 acres that allow you to overlook the Pacific Ocean. Its location is just a few miles from the San Diego Bay.
Rooms and Suites
Hotel Del Coronadao is categorized as a luxury hotel that offers guest rooms and suits. It houses 679 rooms built in three separate buildings. Additional beachfront villas and cottages were added in 2011 making it more attractive and enticing to its visitors. What’s great is that most of its rooms provide an ocean view.
In addition to allowing its visitors an ocean view, they can also enjoy its amenities, such as restaurant, shopping and spa. And if you’re lucky enough to visit here during the winter, then you can participate in ice skating. Yes, it does have an outdoor rink but it’s only set up during the winter season and placed next to the beach.
The Haunting In The Del
Apart from its beautiful rooms and suites, Hotel Del Coronado is also known for “ghost hunting.” The most popular rumor about this hotel is the death of Kate Morgan, who checked in to this hotel in 1892. She stayed in room 3327 where she was waiting for her husband, who was taking a cross-country trip. This room is said to have the most reports about encounters with the ghost of Kate. People who’ve stayed there said that they’ve heard odd noises and temperature change. Some of them even confirmed of seeing the dead woman, Kate.
Of course, this isn’t the only interesting fact about this hotel. It offers wealthy of activities, like weddings and birthdays. In fact, it’s considered by many as one of the most beautiful wedding destinations.
The wealth of activities provided by Hotel Del Coronado will make you hungry. For that reason, it’s always a good idea to bring in a healthy snack that’s rich in protein. It can curb your appetite so you don’t have to eat a lot of food while staying here.
Image source: commons.wikimedia.org
Hotel Tourism