July 02, 2010
Ah, Christiano Ronaldo of Real Madrid and Portugal National Team. He is one of the reasons I am hooked to FIFA World Cup. He is one of those guys I wanted to see in the middle of the night watching 2010 FIFA World Cup. I always love to see him taking off his shirt while on the field. I thought he was perfect, he is after all an Armani underwear model.
While I was browsing photos of him to show some to my friend (who doesn't know he is), I came across this photo:

Yes, the bronze and beautiful soccer guy Christiano Ronaldo has distorted and discolored toenail that might be caused by Athlete's foot. Am I disgusted with this photo? Partly…
But this I cannot forgive. Was he trying to hold the "balls" of Spain's Sergio Busquets while fighting for the ball? 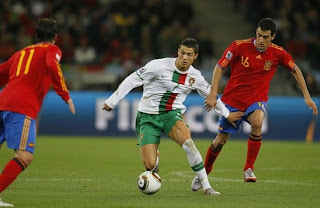 Other topics of interest:
Wanted: Shih Tzu Breeders in Davao City
2010 FIFA World Cup Souvenirs and Gift Items
Be My Siomai
Marc Jacobs for Kids
Marc Nelson: The Most Beautiful Man in the Philippines
entertainment