A Review of PLDT myDSL 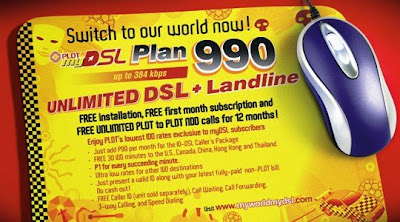 I wrote two posts (Letter to SmartBro and Goodbye) about my horrible experience with my ex (SmartBro). The last post I created was about our break up after more than a year of suffering. When he left, he got everything from canopy, power supply and even the extension wire. But it was fine with me. At least I won't have something to remind me of SmartBro's cruelty.

When PLDT myDSL came into my life, I thought my life would change even though I know PLDT myDSL is a brother of SmartBro. But the mind of PLDT myDSL is more stable. He won't leave my sight (no intermittent connection) and his driving speed (internet speed of 1+mbps) is way better than his brother.

However, just last month, PLDT myDSL's true color was unleashed. He left me for more than 24 hours. But his technical support representatives responded quickly unlike Smartbro's team where I had to wait for like an hour before they'd pick up the phone.

And after more than a day, PLDT myDSL came back. However, after a week, he's gone again. It was still the same. He left for more than a day without saying goodbye and came back after a day of MIA.

I now realized that we have an on/off/on/off relationship. Geez! I thought I was through with that when I broke up with SmartBro.

Wait a minute!!! PLDT myDSL and SmartBro are siblings, only the former has better Internet connection. But they're both the same. Well, maybe it's truly in their genes and it runs in their veins.

Sigh, what can I do? Maybe, I just have to stick with PLDT while waiting for Globe Broadband.