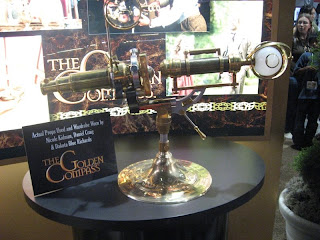 I was in a movie theater, with a friend, when I first saw this film and I got bored while watching Golden Compass. Also, it was a bit uncomfortable because I knew that the person I was not supposed to see was also inside that room. Scary.

Synopsis
For Lyra's young age, it wasn’t ordinary for her to live in a group of scholars inside the sacred foyer of Jordan College and to seek adventure through the outside walls of the said college.

However, her valuable venture started when one day she heard and learned about an extraordinary particle—the magical dust. These particles are exclusively found in the north of Arctic and possessed properties that could join together the whole universes.

These particles are feared by some people and would do anything to stop and exterminate them.

Because of this, Lyra sought the assistance from gyptians, clans and even terrifying bears.

And Lyra's journey is beyond imagination.

I wasn’t sleepy the second time I saw The Golden Compass Movie. And surprisingly, I got excited for its upcoming sequel.

Golden Compass, The Movie
Nicole Kidman's one of the antagonists but she played it well. On the other hand, Daniel Craig appeared only in a few scenes.

One thing that was lacking in this film: humor. The director or the writer wanted to capture something but they couldn’t put it on this movie, The Golden Compass.


Image from Flickr.com by Clockwork_Dandy