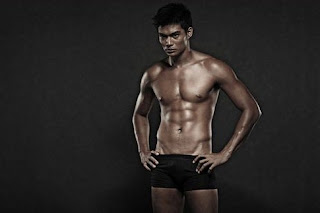 Bench's denim and underwear show is held every two years. And this year's theme is dubbed as Bench Blackout. This is already the fourth edition. Unfortunately, I wasn't able to witness such a big and filled-with-hot-guys event (too bad for my friend, his SD card containing photos of Bench Blackout was confiscated).

Among the Filipino celebrities turned Bench models who participated in the Bench Blackout event are Dingdong Dantes, Sam Milby, Diether Ocampo, and of course my cousin Marco Alcaraz (his father and my father are cousins).

This Bench Blackout denim and underwear show is not only for women to scream while the guys with well-chiseled abs are walking down the runway but it is also for guys to cheer on their favorite female celebrities.

Hopefully, in the next edition of Bench denims and underwear show, I'll be able to personally see and hear the screams emitted by the audience while those male models are showing off their enviable abs.

Other topics of interest:
A Walk To Remember
At Last! Waiter Revealed Their Secrets—Things You Are Not Aware Of
Why They are Successful With Adsense And Why I Failed?—And Goodbye Michael Jackson
Prison Break: The Final Break
Megan Fox And Her Clubbed Thumb
entertainment