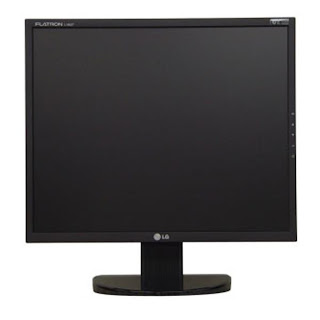 Okay, the title was an overstatement of what really happened. But last Thursday, my LG Flatron monitor died. I took it to an authorized LG repair outlet to help revive it. I don’t know if it was just a coincidence but there were approximately 10 LG Flatron monitors having the same model and size as mine lying there, waiting to be rescued. According to the technician, they all came that day, ergo, the title.

Although my LG Flatron monitor is still under a 3-year warranty, the store—Byteworld-- where I bought it, was no longer in existence. But even though that store was still alive, I still have to pay for the “restored parts” regardless of the warranty, said the technician. This is because that warranty is only for the “LCD” and does not include the “parts.” I didn’t know that until now. I was too confident for the given warranty, so I was lured to purchase it.

LG Flatron monitor has a life span of approximately 30,000 hours, the technician added. That said, if I’m going to use it for five hours, every day, it would last until about 5 years. However, if I’d use it for eight hours, like I usually do, it would only last less than five years. Prolonging it would require a fan, a cooler, or place it in a cool environment while in use.

The performance of LG Flatron monitor is quite good. The display is outstanding. Since it is a LCD monitor, it is easy to carry around.

Overall, I guess, LG Flatron serves me well. But one lesson I’ve learned from this incident—I should not buy monitor, IT equipment and the likes in a fly-by-night computer shops.