Here’s the thing: Hoping to stay connected during scheduled power outage, I loaded PHP 100 for my Globe Tattoo Mobile Broadband after I consumed the pre-loaded amount. Unfortunately, my PHP 100 worth of load got wasted simply because I could not connect to the Internet.

I can, however, access the Internet through Globe Tattoo Mobile Broadband early in the morning when there is electricity and I have my DSL on. In other words, it is still useless. 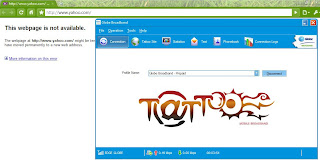 The photo shows that I am receiving Edge Mobile Internet Connection which, according to Globe Tattoo’s connection guide, should get 80 to 120 kpbs and should have a maximum speed of 156 kbps. But after 30 minutes of pressing F5, I still did not have Internet connection. After a few attempts of disconnect-connect, the “this webpage is not available” was still showing up.

Got that Globe? Huh? That should be your campaign ad. You ID-10-T!