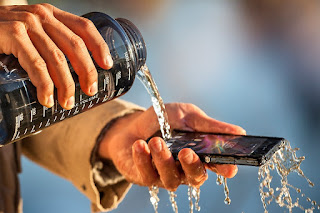 Sony Xperia Z is one of the hottest, prettiest phones presented at CES 2013 in Las Vegas. It is available in black or white. Among the Android phones present, Xperia Z truly stands out.

1. Waterproof
One of the best things about this phone is its waterproof feature. Yes, you can submerge in up to three feet. However, it must only be in the water for 30 minutes. Although it is waterproof, it is not bulky or rugged like the Samsung Rugy Pro. This model of Sony is also dust resistant.

2. Tempered glass
The entire phone is made from tempered glass. The front and back of the unit is protected with anti-shatter film.

3. 5-inch 1080 display.
Its high resolution is one of the reasons it has been considered by many experts to become the hottest gadget in 2013 when it becomes available on the market. Its large screen size allows this unit to be categorized as a phone/tablet.

What is under the hood?
It runs on a 1.5 Ghz, quadcore Qualcomm Snapdragon S4 processor. It comes with a 2-GB RAM and 16GB storage. Its 13-megapixel camera has HDR video capture. With that in mind, it can help you get macro shots that are super close. It can adjust to lower light conditions as well. In burst mode, it can capture successive shots.

Its battery has also improved.

It has built-in apps that let you share photos, videos and music through NFC using compatible Sony devices, such as TV.

Price
Unfortunately, pricing for Sony Xperia Z is not yet available. The company also has not announced when it is going to be released in the Philippines.

Photo Source: Sony Xperia Z
Other topics of interest:
Internet Speed -- 5 Common Ways to Enhance Sluggish Internet Connection
Internet Speed: 4 Simple Tips to Speed Up Your Connection
Digital SLR StolenCameraFinder.com: 1 Effective Way To Track Down Your Stolen Camera
Google Docs: 5 Tips And Tricks You Should Know To Get The Most Out Of Google Docs
What Is Gmail? -- Tips On How To Maximize Its Tools
Technology